What we can do See some examples of our work

Also in this section 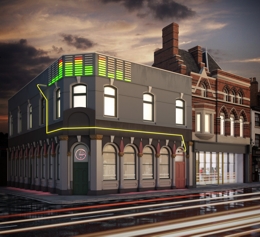 EQ:NQ is an interesting piece of work that is displayed on the outside of Band on the Wall, a famous live venue located in the Northern Quarter of Manchester.

The venue has recently been refurbished with assistance from a number of sponsors. The facilities now include a live venue with first rate PA system, recording studio and rehearsal rooms.

Inside a specially woven carpet depicts giant Jack Lead sound cables. This theme is picked up on the outside with a giant metal Jack connector above the entrance to the venue, a lit 'cable' then leads up to EQ:NQ.

This is  a landmark piece of public artwork which is a one of its kind design, created by artists Michael Trainor and Lee Donnelly to showcase Band on The Wall and the Northern Quarter as the hub of Manchester’s musical landscape.

Covering the entire outside top corner of the building, the external Graphic Equaliser(EQ) installation illuminates the Manchester skyline, with 16,000 LED reacting to both the music being played inside, and ambient noise of the Manchester streets.

Sabre Technology were contacted by the artists early in 2009 to discuss how we would go about realising their concept. We have extensive experience with driving LEDs so that was no problem. The main concerns were in making sure that we adequately protected the electronics from the elements,  and keeping the electronics hidden away. By sourcing suitable enclosures it was possible for them to be hidden behind the top LED fitting. The power supplies were able to be hidden behind the parapet, which kept them close to the LED drivers and minimised power loss in the cables.

The system controller was made using a combination of custom and 'off the shelf' electronics, with bespoke software also created in house. The system monitors daylight levels and adjusts the LED brightness to suit, while a inbuilt clock allows the venue to set the time for switchover from the outside microphone to the live venue sound.

Sabre also handled the sourcing and assembly of all the electronics, resulting in completed enclosures ready for connection on site, together with suitable instructions. The final installation phase was completed by the artists, who also sourced the support metalwork and organised encapsulation of the LED boards. Sabre was on hand to provide telephone support where needed.

This project is a great example of how our flexible approach allowed Michael and Lee to choose the level at which they wanted to get involved with the technology, and then leave the rest to us. Regular discussions allowed both parties to keep the project on track, anticipate issues, and resolve design details. All this was completed without the need for a single face to face meeting.

EQ:NQ was officially launched on 1st December 2009, with mince pies, mulled wine and a live sax.