What we can do See some examples of our work

Also in this section

Beside the Seaside interactive game 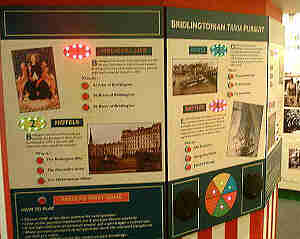 Sabre was contacted by Querceus Design, who were creating new exhibits for the "Beside the Seaside" museum in Bridlington. The museum wanted interactive exhibits to get the visitors involved.

We had already designed several interactive exhibits for the museum when it originally opened a few years ago, but this was to be slightly different - a "Trivia" style quiz about Bridlington. The user was to be enticed into the game by sound effects and flashing lights.

The designers supplied us with 6 graphic panels for the game. We then fitted and wired up the LEDs, buttons and audio system to bring the game to life. The game was controlled by a small microprocessor control board and the audio playback was performed digitally by our standard audio board. As interactive games tend to get a lot of "aggro" from visitors, anything with moving parts tends to wear out, so it was important to have an electronic playback system rather than a CD player or similar. Our control board gives programmable computer control which is much more reliable than using a PC and much cheaper than using PLC logic. 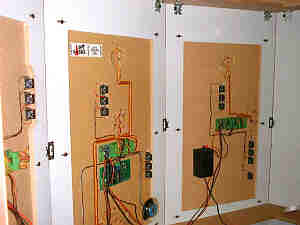 Sabre transported the graphic panels to the museum and installed and commissioned the game, which we understand has been quite a hit with the visitors. The game is designed to be entirely maintenance free, which is extremely rare in an interactive exhibit.

Along the same lines we have also designed some interactive exhibits with audio for the Bridlington Bayle museum. These were rather enjoyable to design because we had to generate the sound effects ourselves, doing impressions of drill sergeants and monks singing evensong. You can play the monks game online, complete with our singing, at the Bayle Museum website (click the "Game" link).